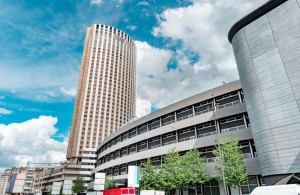 Whether you are staying in Paris for a professional matter, or for the holidays, we welcome you in the best conditions in our hotel near Porte Maillot.

Indeed, between the Champs Elysees, the Congress of Paris and the business district of La Défense, you will enjoy a good location with easy access to the city center.

The origin of the name

Do you happen to know the origin of the Porte Maillot name? It's quite a funny story, very french like, so we will tell it to you...

The name would be linked to the memory of a popular uprising of 1382, the revolt of Maillotins during the reign of Charles VI. Armed with mallets, called “maillet” in French, they presumably left the Route de la Revolte which began at Porte Maillot. Then they joined Montmartre to welcome the King of France, in order to protest, among others, against fiscal oppression.

Porte Maillot is located on the borders of the 16th and 17th arrondissement of the capital.

It constitutes an interchange between the Boulevard Périphérique, the Arc de Triomphe (Charles de Gaulle Etoile) and La Defense.

This place is served by the line 1 of the metro, the RER line C, several bus lines and the noctilien. By 2022, it should change its face with the development decided on the occasion of the extensions of the T3 Tramway and the RER E. It is among other things to make it a public square of metropolitan dimension. It would also ensure the continuity of the green spaces of the green belt.

To see and do in Porte Maillot

At Porte Maillot, you’ll find the Automobilist monument. It is a large bas-relief honoring the manufacturer of the first gasoline car, whom is represented at the wheel of his vehicle.

The site also provides access to the Bois de Boulogne, the former hunting ground of the Kings of France.

From the contemplation of Bagatelle's gardens to the realization of a boat trip, including jogging or the inevitable picnic... There are all kinds of activities which can be practiced in this green lung of the City of Light! The Porte Maillot is also the scene of regular events, in fact musicals, concerts and other events are organized every year at the Palais des Congrès.

A hotel near Porte Maillot

At a single RER stop

You do not need a GPS, or a map, to get to Porte Maillot from our four-star establishment. All you have to do is take the RER C at Pontoise station and stop at Neuilly Porte Maillot. Our hotel is located a only few meters away from the Pereire metro station.

If you want to stretch your legs, you can also reach the Porte Maillot by taking the Boulevard Pereire in just 15 minutes walk.

Before joining your classic room or your suite, take a break at the hotel Ampère lobby, or relax in our enchanting terrace. It is also the ideal environment to have a good breakfast, and start your day nicely, or yet to take an aperitif while forgetting the Parisian tumult...